Every day is one less day of summer... This is the mantra I have been repeating every evening at twilight since early June as soon as the weather turned summery. I didn't want to waste a minute of it, knowing it would be over in a flash.

Here we are in mid-September, already. Some people are tired and ready for the change that fall will bring. I'm not. Well, I am looking forward to soft, rain-soaked soil to dig in so I can get everything planted. But I don't want to say goodbye to sunshine and warm tempertures. Not yet.

Here are photos of things...


Recently I picked up the Mukgenia--a generic cross between Mukdenia and Bergenia. It's a neat, leafy, low growing thing for the shade border. I was pleasantly surprised to see these unique and very pink flowers adorning it.


This poor Dahlia. It didn't die like so many others did after last winter's record cold but it didn't really live either. At least not in the ground. In June I dug it up and put it in a pot. It finally bloomed.

Ditto for the Digiplexis. It survived the winter in a pot but sat around for most of the spring and early summer doing nothing. Finally it's aglow.

I have a few Clematis blooming. Check out this newbie called 'Chameleon'. Aptly named for the way the coloration changes as the flower ages.

It reminds me of how the double-flowered clematis blooms change as they age.


Below is another newbie for me this spring. I'm tempted to think the buds are prettier than the actual flower.

One last interesting floral evolution is the morning glory. Check it out in the morning.

Which do you like better? Personally, I'm not much of a morning person.


I was a bit slow in cutting back my Clematis x triternata 'Rubromarginata' but in like two weeks it is blooming again! This time much lower so I can catch a whiff of the flowers without a ladder.

It's Aster time! (I'm reluctant to embrace the new name, Sym...something or other.)


And there are other bloomers...


I bought Persicaria 'Fat Domino' after reading all the hype about it being a showier, fat spike. I think it has lived up to that hype, compared to the species. Tell me what you think.

I am really impressed with this Euphorbia. I grew it from seed sown last year. It started blooming in July and has been going non-stop since. Tiny white flowers in profusion.


Speaking of white flowers, another Aster. This one is for my shady white garden.


The Hibiscus flowers might be the best part about late summer. So big and blousy, they're impossible to ignore.


Even the smaller-flowered tree Hibiscus (Rose of Sharon) are lookers, aren't they?


I had a chance to buy more Pitcher plants recently but didn't. I'm kicking myself now. But at least I've got this one going to town among the other pond goodies.


The heat really woke up the Crape Myrtle, another stellar late-season bloomer.

Hubby and I are thinking about carving a small creek in this area under the tree. There is a natural slope and I've got tons of rocks I've been collecting. I'm not thrilled about ripping out all these plants but it's almost too shady for them now anyway. 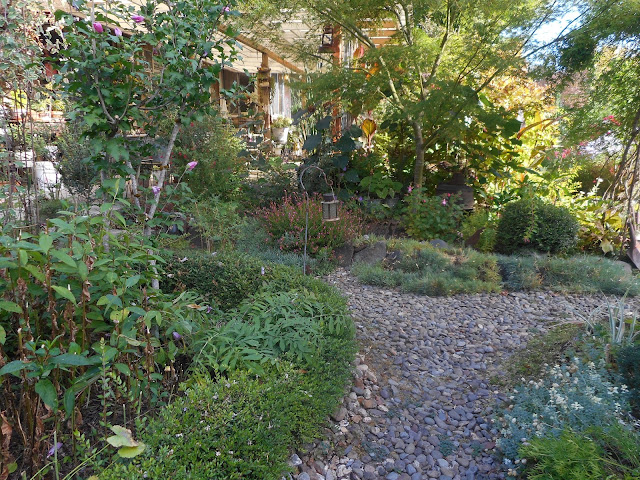 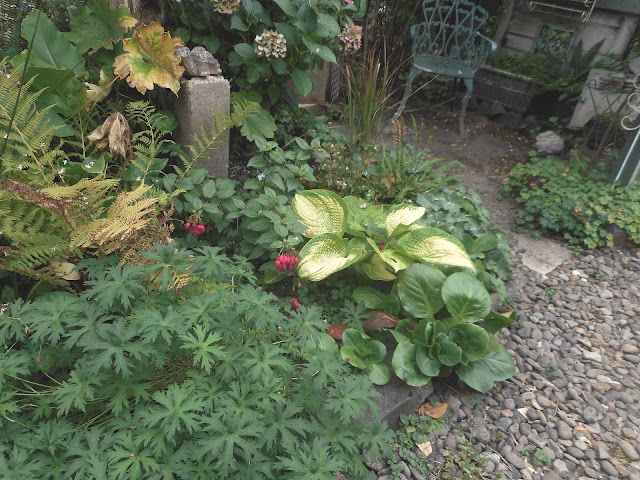 That's all for now. I hope you're enjoying your gardens.

Oops. I published this late last night, forgetting that I promised to make mention of the HPSO Fall PlantFest coming up this Saturday. The esteemed Sean Hogan of Cistus Nursery will be speaking about his favorite plants, followed by a plant sale. You can find all the information by clicking here.