WHO CAN BELIEVE it's almost October already? Here in the Pacific Northwest, the weather has been absolutely stellar all month. Many of my flowers are still blooming which is very unusual for this time of year.

The fall crocuses are in bloom around town. I've never grown them in my garden. However, I bought Saffron Crocus bulbs a few weeks ago. They won't bloom until next fall when I'll harvest the stamens and dry them for saffron seasonig--just for fun.

Hubby and I went on a nature walk last Saturday. Of course I had my camera at the ready. I saw a few wild chicory. A bee is enjoying this one.

Usually by October the blackberries have long since shriveled up. This year, there are not only ripe berries still waiting to be picked, but red berries waiting to ripen.


The trees are all still very green but the poison oak is turning a pretty shade of red, not unlike my skin had I decided to touch it, which I didn't.

I thought I took more photos on our hike but that's it. But below are a few drive-bys. Look at the giant, yellow bamboo growing around this house. It's a little informal but I think it's kind of cool. Just for curiosity's sake, maybe I'll come back and get another photo in January when all of the surrounding deciduous trees are leafless.

I took the photo above because of the huge red-leaved Phormium. I should have gotten closer because the strips aren't evident. It's a beauty, nuzzled as a vertical, spiky, juxtaposition among its rounded neighbors.


Just like the blackberries, the crape myrtles, typically at their best in late August, are looking gorgeous right now. The photos above and below depict the two trees on either side of the entrance to this building. 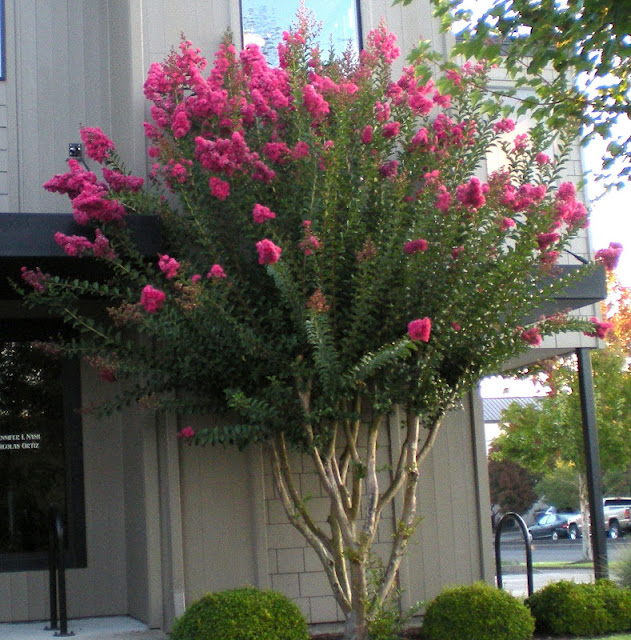 I took the photo below today also. This crape myrtle is a little more free-form but still very pretty, don't you think? 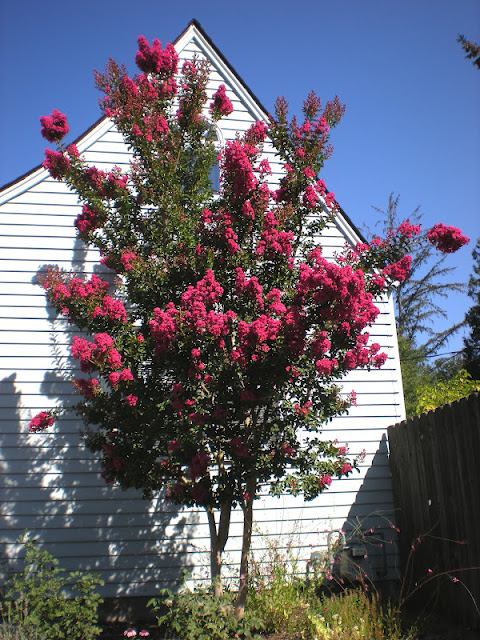 My sister, who lives in the eastern part of the state, has already had a frost. Have you had a frost yet? Is your garden ahead or behind or right on time?