DESPITE MOTHER NATURE'S little tirade earlier in the week, my garden remains fairly intact. I lost a few stems on my hardy Begonia and a lot of leaves from my Heptacodium (seven-son's flower) but by and large, it's all just a soggy mess in need of clean up.

I love Hydrangea serrata 'Preziosa.' In June, the blossoms emerge white with a hint of lavender. Slowly over the summer months, they morph to lavender, then pink, finally ending up like this--a deep luscious carmine red. My favorite!

Along those color lines, check out this sweet Agastache I found at (of all places) Home Depot! I don't have a lot of luck wintering over Agastaches so I've been extra careful about placing this one so it will get proper drainage and not be covered up with leaves.

At the beginning of the season, around April or May on my first trip to Fry Road Nursery, I purchased a small plug of this variegated leaf Pelargonium. It's huge now. The flower color is a jarring OSU orange so I snip off the buds before they have a chance to make me barf. (Nothing against the university.)

Last year I bought a bunch of hardy fuchsias from Fry Road. This nursery has a bazillion different varieties. (Click on the link on the sidebar to see for yourself.) Here they are now, strutting their stuff. I'm in love!

Another serendipitous trip to the big box, (something I like to do occasionally on my lunch hour) brought me face to face with this fabulous Salvia. The tag had some weird silly, big box moniker I'd never heard of but since several years ago I grew one that looked identical to one and it was called 'Purple Majesty' I'm calling this one 'Purple Majesty.' So far the plant hasn't objected so I think it enjoys its royal treatment.

In the container below is a new (to me at least) cultivar of Brachyscomb (Swan River Daisy). I think it's called 'Jumbo Mauve.' Although the flowers aren't any larger than the old standby, the color is a much more vibrant electric mauve. (They should have named it "Electric Mauve." Duh.)

It looks really cute with this self-seeding annual Gypsophila (that I didn't plan). 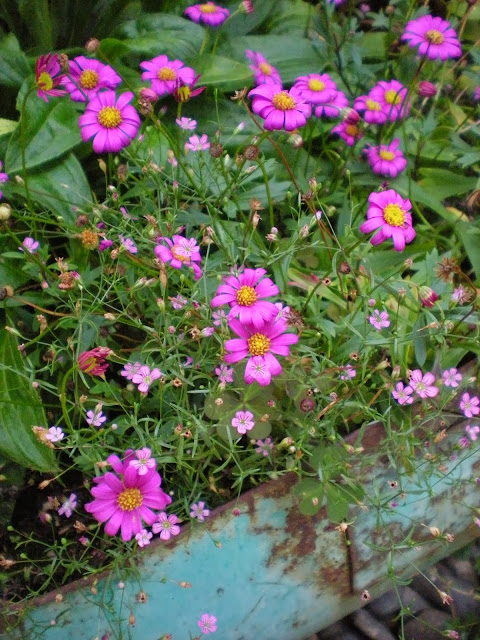 And here's one of my favorite grasses:

This next plant is for Loree and all her followers. You know who you are. You who are enamored of the genus "Spiky" "Dangerous" and "Ultra-cool". Maybe you're already familiar with Cheilanthes sinuata  or "Wavy Cloak Fern." It's new to me and when I spotted it at the Salem Hardy Plant Sale for a whopping $3.00, I said "gimmee." The tag reads: 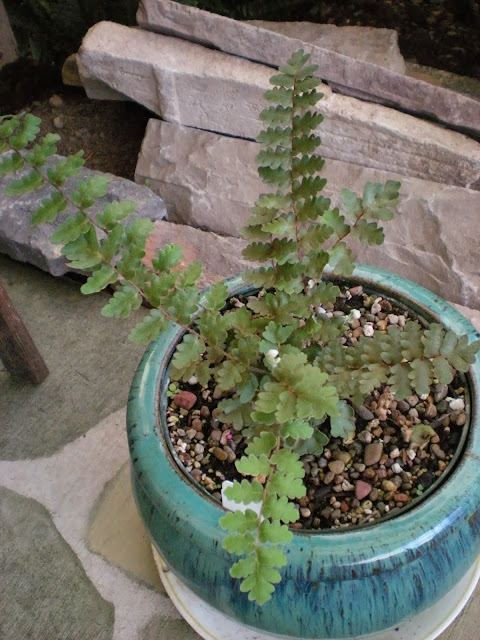 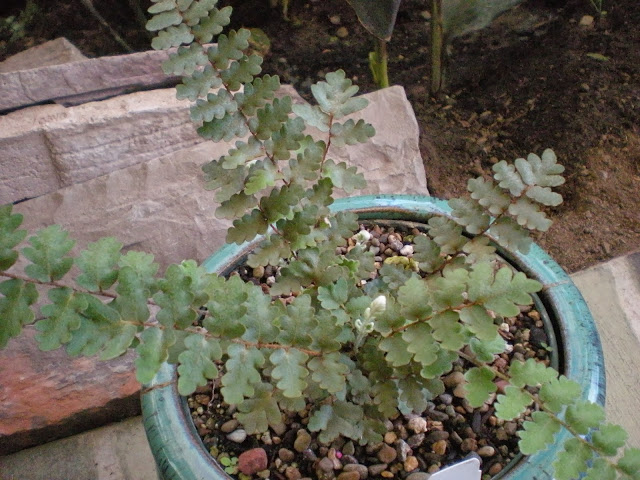 Lucky for me, the local Farmers' Market has a Wednesday gathering. There is one really nice lady named Brenda who faithfully sets up her booth, not with edibles but a bunch of really cool plants. I've bought goodies from her for several years. Just recently I simply had to have this little guy. Like the aforementioned fern, this will also stay in a pot for safe keeping. Besides I want to enjoy these sweet little Meadow Rue-esque flowers up close and personal. Each flower is about the size of tic-tac.

This is typically a spring bloomer and goes dormant in summer.

Recently on a trip (lunch hour again) to the local Goodwill store, I found this cool rock. It's actually pumice, I think. It had a nice sized hole already drilled so I planted one of my Semp gatherings in it. I'd love to have a few (dozen) more of these in various sizes. Aren't they cool? 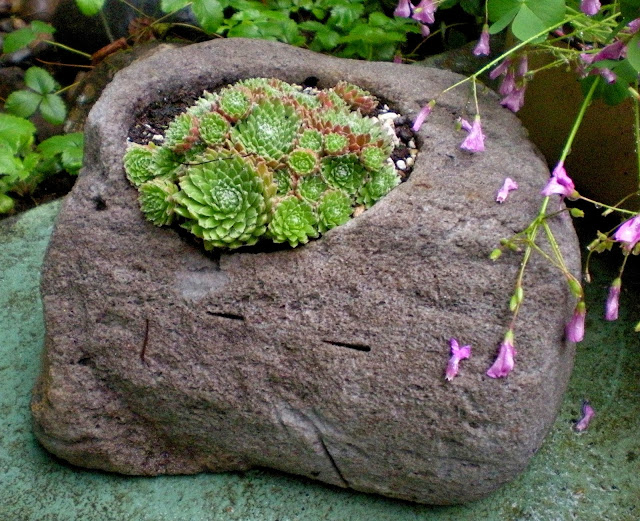 One of my current obsessions is hardy Geraniums. I bought seed for this one (below) in the spring. I'm very pleased with it. There was a few white flowered ones in the mix.

A few garden photos, taken before the winds. 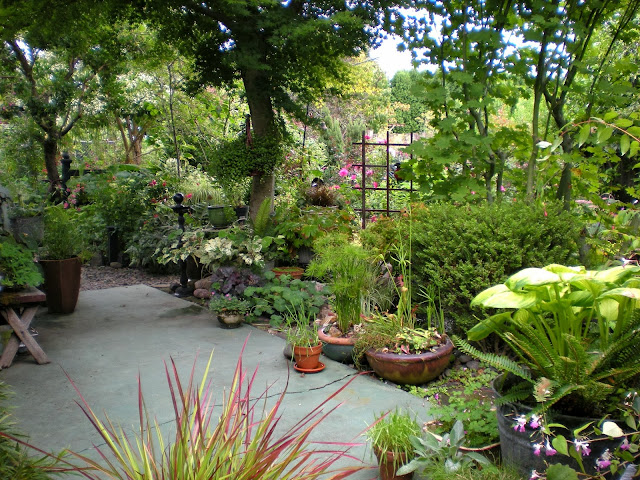 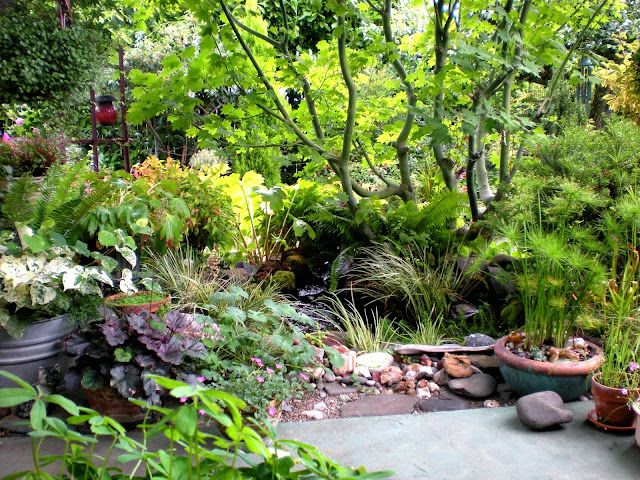 Several posts back, I mentioned hubby Steve's and my decision to dismantle our deck and replace it with a cement patio. I promised before and after photos. Well, we're almost finished. My daughter is painting it in a faux flagstone motif that looks awesome. And my son has just gotten the tool that will allow him to mount the final posts for the roof. That said, photos will be coming shortly. I know you're all waiting on pins and needles, right? Ha, ha, ha...