Plant of the Week: Hebe

I believe it's pronounced Hee Bee. At least that's what I say and what everyone I know says. However, taxonomists have changed the genus to Veronica which I can understand because the flowers look very similar to the herbaceous Veronica and it's the reproductive parts that taxonomists use to classify plants. But most of us are still calling them Hebe and we're more interested in the foliage anyway.

My first encounter with Hebe came years ago when visiting the sadly now-defunct Fry Road Nursery. They sold a bunch of different Hebe species and varieties as small, rooted plugs that I would bring home and grow on in larger pots until they were big enough to get planted in the ground. Not always would they survive but that's the way it goes with gardening.

One of my favorite Hebe is a long time survivor. H. albicans 'Pink Elephant' looks its most dramatic in winter. This first photo was taken several years ago when Pink Elephant was a baby.

Check out the leaf colors. 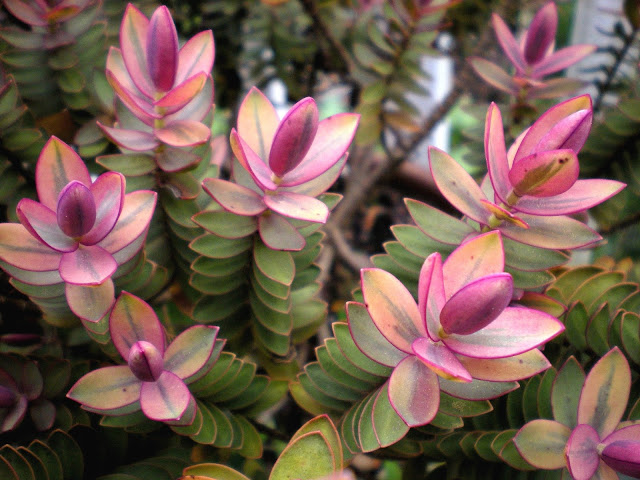 I need to tip prune it this spring so it will get more bushy. I've been negligent.

Here is a wider shot of the Hebe situated in this bed, photo taken yesterday. 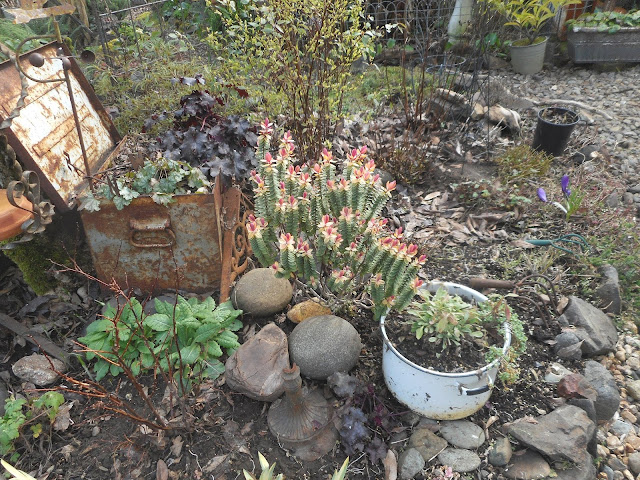 Below is a crappy photo of 'Pink Elephant' taken in the summer to show you how ordinary the foliage looks during this time of the year. 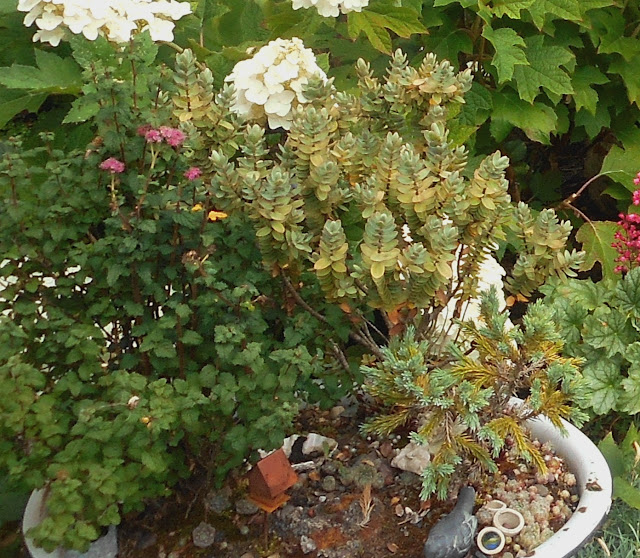 And one more photo taken last summer. See the red circled Hebe? It's easy to miss in summer. 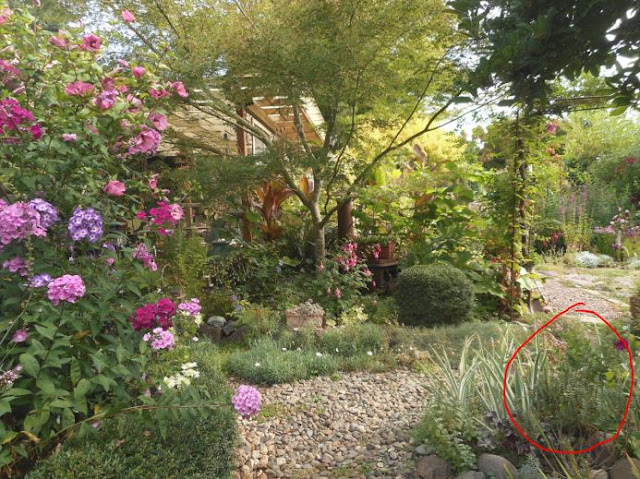 Hebes are compact, evergreen shrubs whose native lands are Australia New Zealand. They won't survive cold winters but do really well in the Pacific Northwest. Well, I should clarify. The small-leaved Hebes will do fine with our winters. The rule is, the smaller the leaf, the greater the likelihood it will survive in our climate while the larger-leaved varieties are better suited for the coast and Zone 9 winters.

Not all Hebes are as colorful as 'Pink Elephant.' However, Hebe 'Red Edge' is a close second. Obviously named for the red margin on the gray-green leaves. It's actually more magenta than red though. See it below.

Below, Hebe 'Broughton Dome' is probably the tiniest of the small-leaved Hebes. It looks like a conifer. No fancy other colors here. Just a gorgeous silver-green.


Below is Hebe buxifolia (I think) or "Boxwood Hebe". It has been here for probably five years.


It looks the same in both summer and winter. It makes an easy, year round, low growing presence in the garden. Mine is in mostly shade but it does equally well in full sun.


The below photo was taken in May of 2014, not long after I planted it. This gives you an idea of how fast it grew.

Another Hebe in my garden is Hebe sutherlandii. It has gray-green, small leaves and also looks fantastic all year.

My Hebe 'Quicksilver' is still really small. I bought it in 2017 and it appears to be a slow grower.


I bought two little Hebes at a nursery in Eugene last year. They were not labeled so I'm guessing on their specific identities. Please correct me if I'm guessing wrong.

I won't bother you with all of the Hebes I've killed. But now that I've gotten better about protecting cold-sensitive plants, I'd like to try again to grow some of the larger-leaved, summer blooming Hebes. Perhaps 'Great Orme'. My earlier experience with that plant was a success until it wasn't. I can blame that colder than average winter but if I had protected it, maybe it would have lived. As with many plants, I'd like another chance.

What is your experience with Hebe?