A Change of Heart

For those of you who are regular visitors, there is no doubt you're aware of my reluctance towards autumn. You've patiently read my incessant bemoaning; my carrying on ad nauseum; whining and bitching like life was really handing me a bitter pill.

Which is absolutely ridiculous. No bitter pills here.


It's not so much fall itself I was protesting. It was saying goodbye to summer. Witnessing the long, sun-filled days and evenings come to and end and with it, the decline of my summer garden. I know I'm not alone either because many of you have written of the same reluctance.

Well, I confess that, finally, here in late October, my attitude has adjusted favorably. Finally.


I suppose it's the allure of the blushing trees, the soft glow of the sunlight, the cooler temperatures, orange scatterings dancing across the road; russets, reds and golds illuminated by a cloudless blue.  How can you not love that?

Foggy mornings, the smell of wood smoke... you get the picture.

The temperatures have been very pleasant lately. I'm still behind on garden work but didn't let that deter me from snapping photos earlier today.

Granted, there is lots of chaos but treasures can still be found.

I still have a few goodies left in the garden. The berries are just finishing up. I got a nice handful of both raspberries and blueberries. Tasty!

The tomatoes were tasty too. 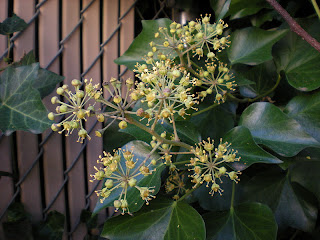 My neighbors have a politically incorrect Ivy vine. Whether they are aware of Ivy's propensity to smother trees or not, I don't know. I'm thinking not since they're allowing it to climb the fence and basically take over.

Check out the little sputniks on the left. They are the flowers of the Ivy. This photo is but one small representation of a huge mass of blooms right now. The sound of the honeybees is what alerted me to them. Not much to look at, they sure make the bees happy. So I guess Ivy does have one redeeming quality. Who'd a thunk?
I thought I'd leave you with one final lilliputian treasure. Cute, isn't it?


What do you think of my new header photo? This and the new one on Subplots By Grace, my other blog, are the fruit of my Saturday, sitting on my arse. I've got a new post over there too, if you've got a minute. Thanks for your kind comments!